Reading All Steel Percussion Orchestra first experienced the Panorama Steel Band Championships in 2007 and has since gone on to compete with the UK’s top steel bands for the title of Champions of Steel.

Panorama is the National Steelband Championship originating in Trinidad. The event is part of the annual London Notting Hill Carnival since it started in 1968.

The players travelled from Reading to London every weekday evening for three weeks to practice as part of Mangrove’s seventy-five strong orchestra.  Mangrove won third place out of the nine UK bands who competed for the title of Champions of Steel.

37 piece RASPO practices Bubbles’s arrangement of ‘Pan on Fire’ for its Panorama premiere in 2010.

In 2010 RASPO entered Panorama for the first time in its own right.  The thirty-seven piece orchestra worked with Trinidadian arranger Michael ‘Bubbles’ Oliviere to learn ‘Pan on Fire’ for seventh place in the competition.

Iman Pascall from Berklee in New York arranged ‘Calling Meh’ for RASPO in 2011.  Sixteen players from Bucksburn Academy in Aberdeen, Scotland joined RASPO for sixth place in the competition.

Prior to the competition all competing bands traditionally practice their arrangement outside.

RASPO previews its Panorama performances in Reading centre, testing out the complex ten minute arrangement to balance the orchestral sound, gain local support and as a final rehearsal for the actual competition.

The breathtaking performances delight and inspire audiences many of whom may have never before seen or heard the magnificence of a large steel percussion orchestra. 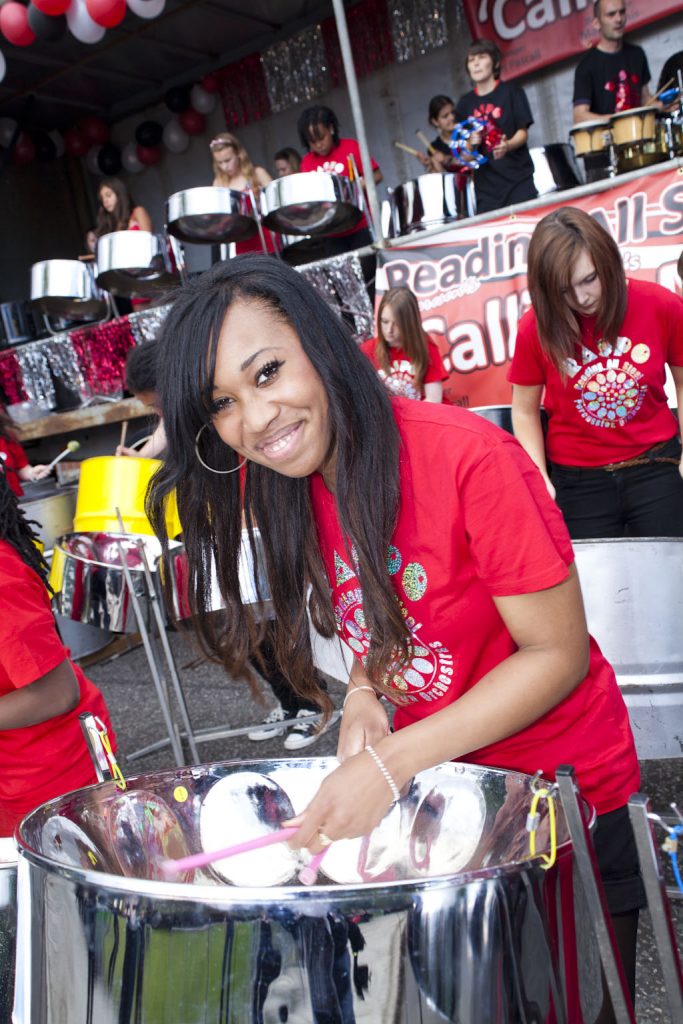 In 2010 RASPO entered for the first time in it’s own right playing Michael Bubbles Oliviere’s arrangement of ‘Pan on Fire’ for sixth place.

This 2014 documentary is about the UK Panorama Steel Band Championship, how it started and a look at the steel orchestras that compete for the title of Champions of Steel.