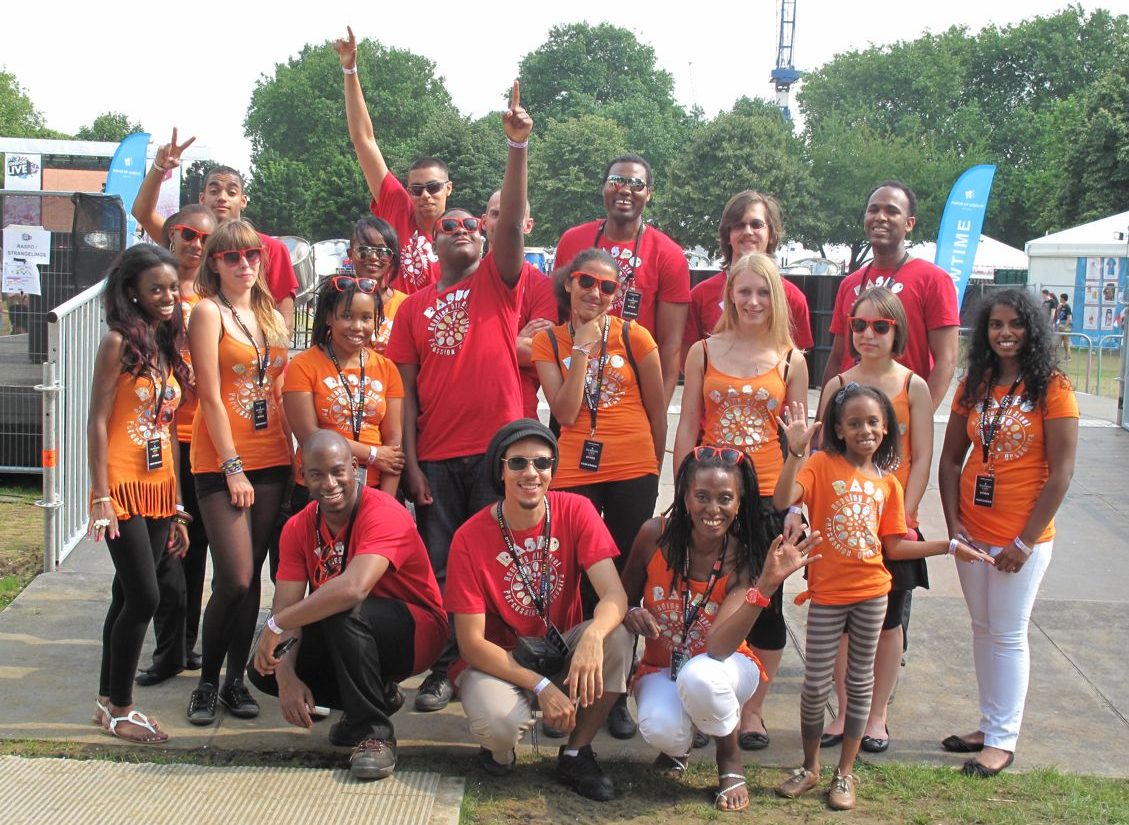 The year RASPO performed for the Showtime Festival at the London Olympic and Paralympic Games, and at the Royal Albert Hall. 2012 – a year like no other.

To make the best of 2012 CultureMix created a series of short ‘informercials’ and a second CD recording for RASPO. The plan succeeded in raising profile and attracting new audiences whilst increasing opportunities for the orchestra to develop supported by the growing organisation.

CultureMix Music Centre
Thanks to Jelly CultureMix moved RASPO into the Jelly Sound House previously the Mannakoo club opposite Reading railway station. The disused night club provides storage for the instruments used for school workshops, and rehearsal and workshop space for the orchestra.

However this is a temporary solution as the club is part of the railway station re-development and will soon be demolished. A permanent space is sought so CultureMix can maintain the creative development programme for aspiring young musicians.

2012 CultureMix Review including The Steel Band – how it works

The TASPO to RASPO theme for 2012 activities celebrated the impact of TASPO’s first appearance at the Festival of Britain in 1951. As a modern orchestra RASPO is an example of the future of steel pan music in the UK. In the Spring well attended steel pan music and Carnival head dress workshops took place at the new venue as part of Reading’s Children Festival.

RASPO – Reading All Steel Percussion Orchestra
2012 proved to be a winner for RASPO with performances key events like the Queen’s Diamond Jubilee and the Olympic Games.

RASPO launched the year by providing entertainment at Party in the Sky to raise money for special guest Dame Kelly Holmes‘ charity.
The 50th Anniversary of Jamaican Independence Dance and Gala followed in the presence of the Jamaican High Commissioner and Boney M’s Liz Mitchell. Both events took place in January at Reading’s prestigious Hilton Hotel.

Following performances for Torch Relay events at Reading’s Madejski Stadium and in Theale in invitation came from the Mayor of London’s office to attend the national press launch of the Giant Olympic Rings and the Showtime Festival. Organised by the Greater London Authority (GLA) Mayor Boris Johnson launched the summer events to the world’s press. RASPO provided the musical backdrop appearing on television news around the world.

In April the orchestra recorded their second CD ‘RASPO Rhythms‘ at the Tabernacle in Notting Hill. The recording was supported by Mangrove’s leader Matthew Phillip who runs the Engine Room Studios at the Carnival Village venue. Dedicated to the memory of Marian Walker RASPO Rhythms pays homage to original TASPO member Sterling Betancourt MBE who championed the CD.

RASPO joined the BBC Proms Family Orchestra to represent a musical postcard for an live concert at the Royal Albert Hall. Prom 58 featured the Blind Boys of Alabama in the live BBC Radio 3 broadcast.

Education and Workshops
CultureMix continues to advocate the benefits of steel pan music, djembe and carnival arts working in partnership with the newly created music hubs in Berkshire, Slough and Hampshire.

Oxford Road Community School steel band members joined RASPO’s Junior Orchestra performing for the first time at Christmas at the Calypso and Carols fundraiser in Reading Town Centre. Congratulations to all juniors and to Jamie, Godley and Aisha whose hard work has won them a place in the senior orchestra.

RASPO Juniors join the orchestra for the Christmas Calypso and Carols concert.

Professional Development
Emma Macedo became RASPO captain for 2012 supported by Aynsley Lynam as vice captain. Aynsley has now moved on to pursue other ventures – we wish him well.

Trinidad born Nicholas Walker joined CultureMix as an education tutor and musician making his debut on the Showtime tour. Nicholas, who has a degree in marketing, will focus on international pan education links and strategic development.

Nathifa Jordan returns to Surrey University for her final year of her degree in psychology. She continues her part time work with CultureMix as the youth development advisor and assistant to the artistic director.

Mary Genis became an Olympic Ceremony volunteer performer as on of six hundred umbrella dancers in the Paralympics Opening Ceremony.

A London 2012 film of behind the scenes rehearsals for the umbrella dance of the Paralympics Opening Ceremony.

After 10 years with RASPO David Miller left to study Mechatronics and Robotics at the University of Sheffield. Good luck David!

CultureMix provided a careers advice seminar at Wellington College for Future Foundations. Members of South Street Arts Centre based Project AIR (Activities in Reading) interviewed CultureMix’s director to find out how the organisation can help the creative careers of young people involved in Groundwork Fixers. Both projects are part of the National Citizen Service, a programme for Year 11 students to learn new skills.

Awards and Memberships
As members of the Reading 2012 Partnership Board CultureMix director Mary Genis and the director of Jelly Suzanne Stallard both signed up as Reading’s first LOCOG Local Leaders at a Butter Market press launch with steel pan music and banner making. The Board closed it’s doors after successfully delivering Olympic themed events in Reading.